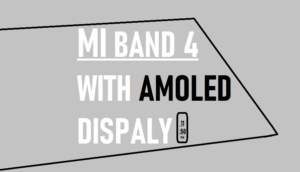 The Xiaomi had already launched their smart bands in the market like Mi band 3, Mi HRX band. But in 2019 Xiaomi finally launched the Mi Band 4 with AMOLED display that looks very decent. The Mi Band 4 have 2.5 D Display which looks very good and attractive. The other features like The new Mi Band version feature a color AMOLED panel curved glass protection.

The  AMOLED display brings support for watch faces which can customizable in different types. Xiaomi has launched the list of different wrist band options with the smart band. The Mi Band 4 Amoled comes with a six-axis accelerometer sensor which is more accurate than MI band 3. MI band 4 has the ability to track physical activities while on-the-movement of our boy. he Mi band 4 also supports payment support that is backed by Alibaba’s Alipay.

The Mi Band 4 is the successor of Mi Band 3. Now let’s talk about the price of the Mi band 4 in India. The Xiaomi Mi Band 4 AMOLED price in China has been CNY 169 (Around Rs. 1,700) for the standard edition and for its NFC variant is priced at CNY 229 (Around Rs. 2,300). There is also a unique series available fro this band Mi Band 4 Avengers Series Limited Edition. Marvel superhero faces, and a special Marvel Avengers’ package at CNY 349 (Around Rs. 3,500).

In India, the price for Mi band 4 AMOLED starts with 1999 rs. for the basic variant. This Mi band 4 will start selling on the official website as well as other E-commerce websites.

3. The Mi band 4 model supports touch inputs as well as a built-in microphone for commands.

5. The Mi band 4 can able to track cycling, exercise, running, swimming, and walking.

6.  Xiaomi Mi band 4  has a special feature for payment on the Mi Band 4 The users need to swipe the screen to show to QR code to make payments on-the-go.

This all are main features on Mi Band 4 and price of Mi Band 4 in India. Hope this article will help you easily and shortly for all information. If you want to read complete features in brief then you can also check our post on the website.