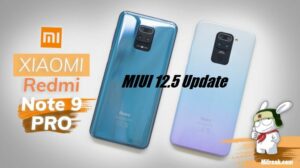 The Upcoming MIUI 12.5 update for Redmi note 9 Pro Brings the major change in Optimization of CPU, Memory, and battery level. This update reduces the battery consumption up to 15% and CPU Optimize up to 22%. This makes the device much faster and CPU Utilization works better.

MIUI 12.5 the mid update based on Android 11 will be hit too many devices in the upcoming months. The company’s had working on maximum optimization that helps to achieve the best performance. Also, It includes several new features. However, yet company didn’t mention many features for MIUI 12.5 but we can expect some minor and major changes in operating.

The upcoming MIUI 12.5 for Redmi Note 9 Pro will expect to get by April or May of 2021. The company has unveiled the release time and we can expect MIUI 12.5 Update in the upcoming months. The upcoming update is based on Android 11 and will start to roll out very soon.

The Update will start to roll out for Redmi Note 9 Pro in Second Q2 which means we can expect it after April Month for the Note 9 series.