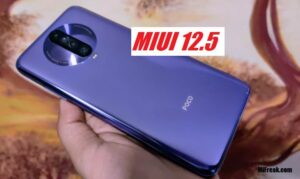 The MIUI 12 Stable Update was recently released and similarly, the MIUI 12.5 Update is going release soon. However, The Poco X2 will be in the second phase for this update which means after the first phase release then it will get updated to MIUI 12.5. Also, The Latest update contains several optimizations on the device that mean faster processing.

What are those Optimization in MIUI 12.5 Update: Battery will save up to 15%, CPU Optimization up to 22%. Also, for the theme gestures, the Sperate thread will run for processing this helps in faster CPU Utilization.

This Update for POCO X2 will release in May 2021. In the second phase, the update will start the rollout for the Poco X2 device. And then users can get the Optimized Mid version of MIUI 12 Update.

As far as Xiaomi has not disclosed the release date of the MIUI Update for Poco X2. However, the update will be expected to get for the device in May 2021.

This device is eligible for MIUI 12.5 Update. And soon the deice will receive the Update you can check the release date of upcoming update in this post. Just read the post completely and you will get all the answers to the questions.