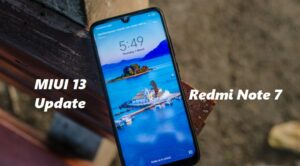 The MIUI 13 update expected to be available for Redmi Note 7 users. However, first, the beta testers will receive the MIUI 13 update for testing purposes after that the Stable update will start to roll out.

Will Redmi Note 7 get MIUI 13 update?

The MIUI 13 Update for Redmi Note 7 will be available in the second half of 2021. The devices will starts receiving Beta updates earlier than the stable release. Recently, one of the Mi Community Moderators has posted the MIUI 13 eligible devices list and the Xiaomi Redmi Note 7 will be in that list. Also, the community moderator posted the update will be available soon for the eligible devices.

The MIUI 13 for Redmi Note 7 comes with the latest generation OS update from Xiaomi after MIUI 12 update. This MIUI 13 also has some unique and awesome features which make the UI more powerful for use. Currently, the update is in development and the company is taking feedback from users to make the OS more powerful and reliable for daily use.