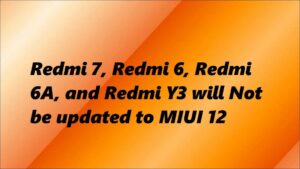 Xiaomi has now officially announced that the Redmi series smartphones including Redmi 7, Redmi Y3 Redmi 6, and Redmi 6A will not be updated to MIUI 12 Custom ROM. However, this notice was already posted by the company on the telegram channel.

Also, The Redmi 6, Redmi 6A already considered as non-updating smartphones for MIUI 12 Stable updates. But for Redmi 7 and Redmi Y3, this is the bad news from the Xiaomi company. And these Xiaomi devices will not get MIUI 12 updates. And the users are not able to experience the MIUI 12 features.

MIUI 12 not Available for some Redmi devices

The Redmi 6 and Redmi 6A has already received One Major Android upgrade and two MIUI updates from the company. Similar to Redmi Y3, this device was launched earlier than the Redmi 7. And received one Android update and got MIUI 11 out of the box. But talking about Redmi 7 The device will be expected to get updated on MIUI 12. But the device will now stick on MIUI 11 and Android 9 update. The company officially confirmed that this device will not receive the MIUI 12 update. Because of performance and compatibility problems raising while updating to MIUI 12.

As well as the Redmi 7, Redmi Y3, Redmi 6, and Redmi 6A will not able to experience the latest features of MIUI 12. The MIUI 12 features are a richer user interface, Better GUI, Enhanced privacy, and Super Live wallpapers. The update is stopped for these devices means the MIUI 13 also not available for these devices. Also, these Redmi devices do only get Android security patch level updates in the future.

In conclusion, Xiaomi may have tested the MIUI 12 compatibility for these devices. And comes with the result that these Redmi devices’ hardware won’t be able to handle the MIUI 12 update. And will not work properly on Redmi 6A, Redmi6, Redmi Y3, and Redmi 7. Also, the devices are in the old segment from company Xiaomi.