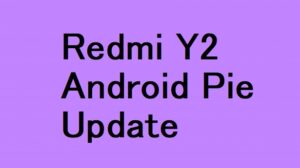 Redmi Y2 is one of the budget smartphones in the low price segment in India. This smartphone already received the MIUI 10 Stable update with latest features. But Now Redmi Y2 Android Pie Update and the MIUI 10 has rolled to out to the Redmi Y2. This Update also includes July month security patch level update fro Redmi Y2. The Redmi Y2 is getting MIUI 10.3.0.3.PEFMIXM Update in India. The Xiaomi has officially confirmed the Redmi Y2 update.

This Update is rolling out in India very fast all Redmi Y2 get this Android pie MIUI 10 stable update It should be reached within a week to everyone.

This is all updates and improvements in Redmi Y2 MIUI 10 Stable July Update. The update has contained many bug fixes for Redmi Y2. The Redmi Y2 Already have MIUI 10 Stable update but don’t have android Pie update. So the Update is Based on android ie and should have better features and interface as compared to the old version.

This all are main Bugs which are happened to many uses many times. but hope so now that is all fixed.

You can also read: