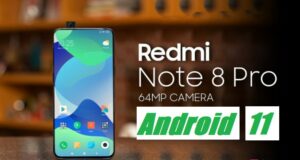 Also, The Redmi Note 8 Pro is launched in August 2019. And device had Android 9.0 Pie Based MIUI 10 firmware out of the box. Also, This is the last Android update for Redmi Note 8 Pro. Because Android 11 is the third major update for the device. And hopefully, the device will receive up to MIUI 13, MIUI 14 updates in the future.

In the upcoming weeks, the Android 11 Beta update get available for the Xiaomi Redmi Note 8. And the MIUI 12 Stable version updated security patch level is also expected to be available for the device. As soon as the update will start rolling out we will inform you by the notification that you must follow us and turn on the notification for mifreak.com to get the Android 11 update for Note 8 Pro.

As soon as the Android 11 beta build will be available for the devices like Note 8 Pro and Note 8 the download link will available for both. And you can check for Android 11 update and install it by going to Setting>> About devices>> update details>> Check for details.

Android 11 is completely based on how you use your phone. The update comes with so many improvements in User conversation, Privacy settings, and so many other things. Also, The update brings the latest Accessibility portability interface which will easier to access your apps and settings. Content capture is more east with the Android 11 update you can check complete details on the official website.