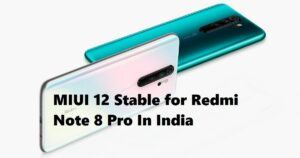 The Redmi Note 8 Pro device was launched in October last year and had MIUI 10 out of the box. The MIUI 12 Stable finally reaching to users in India you can check the complete schedule for MIUI 12 Stable release.

The users receving version MIUI12 V12.0.1.0 on Redmi Note 8 Pro and now users can download by simply heading to Setting > About phone > Check for update.

Also, the MIUI 12 Stable update size is about 614 MB and comes with version V12.0.1.0. The users can now update their device to the latest OS from Xiaomi. The MIUI 12 Comes with wide latest features like really enhanced privacy protection. Also, The MIUI 12 update contains several changes in Users interface now we can experience seamless richer GUI effects on Redmi Note 8 Pro.

The Redmi Note 8 Pro Device was launched back in 2019 and comes with MIUI 10 out of the box. as well as the MIUI 11 stable update was just started rolling out for the device just after a month. However, The device is now started receiving MIUI 12 Stable update in India users can download and enjoy the new OS from Xiaomi.